I was going to blog about everything I’ve been promising to blog about, honestly, but after spending the past hour and a half fixing up the blog stylesheet so it would match the Rose City Knits website (which, incidentally, have you seen?), I’m not feeling too coherent.  And I’m not even done fixing it (gah :P)

My blogging habits are a work in progress, unfortunately.

Until I get some solid (post) writing time, I leave you with two sneak peaks:

My Courant Baby Blanket, designed for Shibui Knits (see even better photos here… note to self: post pattern on ravelry!  ack). I even made up the stitch pattern one evening while playing with some Staccato they’d given to me for experimentation.  My original idea was to find an attractive way of combining a solid color and a hand-painted colorway without it becoming overwhelming or garish.  Apparently, that was a success.

Then, two, what might be the next Rose City Knits pattern (maybe, there’s another two in the pipeline, and it’s all about which sample+pattern gets finished first!): 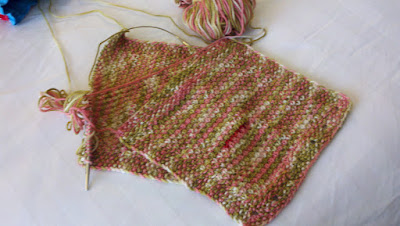 First person to guess what those squares will be is going to officially be Very Clever.  Incidentally, yarn is from Tactile Fiber Studio in the color “Dogwood”.  Not that will help you guess in any way :)

Until next time (which shall hopefully be quite soon), I hope you’re enjoying your summer!

This site uses Akismet to reduce spam. Learn how your comment data is processed.

Seek and Ye Shall Find…